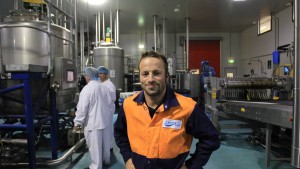 DARRELL LEA products should be on sale in every major supermarket chain in time for Christmas shopping, Klark Quinn, one of the new owners has said to the media.

That’s a sweet turnaround for the 85-year-old company, which was put into voluntary administration in July by its previous owners, the Lea family, resulting in the closure of 70 shops and the loss of nearly 400 full and part-time jobs.

Quinn Foods, another family company, has already negotiated a distribution deal with IGA, which will stock Darrell Lea products by the end of this month.

The company is also talking to Coles, Woolworths and other supermarkets.

Mr Quinn, the youngest of the four Quinn children, has been charged with returning the confectionary company to profitability.

The company will likely eliminate 600 lesser-known products to concentrate on expanding sales and distribution of 200 well-known and profitable products, including its Batch 37 Soft Eating Liquorice and Rocklea Road.

The Quinn family is planning to modernise the plant, but will retain many old confectionary processes and equipment, including the burnished copper pans where cooks make peanut brittle without a recipe and thermometer. These give Darrell Lea products their distinctive handmade flavour.

Mr Quinn stressed that Darrell Lea’s reputation and brand was precious to the Quinns.