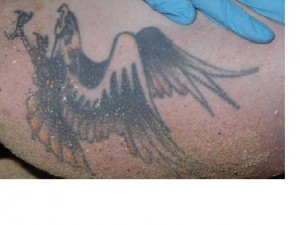 DNA results have revealed the identity of a man found dead in shallow water at north Cronulla in May as 63 year old Brisbane man Neil Vining.

Miranda police identified the deceased man last week, after a three-month-mystery as to who he was, even after they released pictures of two eagle tattoos inked into his upper arms.

A man walking his dog found the dead man, wearing only socks and shoes, on the water’s edge about 11pm on May 21.

Detective sergeant Rod Pistola said Mr Vining was reported missing from a refuge in Queensland two days before his death.

It is believed he caught a train to Sydney but police said they are still trying to work out why he came to Cronulla. Autopsy results found he died from drowning but the results of toxicology tests to see if there were any drugs or alcohol in his system were not yet known.

Police said at the time it did not appear the body was in the water for very long and a pair of pants were found nearby.

His family in Queensland have been informed and police are not treating the death as suspicious.