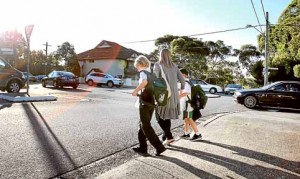 SUTHERLAND Shire Council has been asked to install traffic lights at the intersection in Cronulla near where a student was knocked down by a car in May.

Burraneer Bay Public School principal Greg Fitzgerald had lobbied the school’s P&C to support his recommendations to the council for traffic lights at the corner of Gannons and Burraneer Bay roads.

The school’s P&C president Lee Campbell had earlier called for a new pedestrian crossing south of the intersection after the May 3 accident which left a year 1 student fighting for his life.

The 6 year old boy, was hit by a car as he ran on to Gannons Road. He spent several weeks in intensive care at Sydney Children’s Hospital with injuries including a fractured skull.

Although released from hospital, he is yet to return to school.

A P-plater who was driving the car was cleared of wrong doing. The school is serviced by two pedestrian crossings patrolled by RMS-funded supervisors, but there is no safe place to cross the section of Gannons Road where the boy was hit.

The school had long campaigned for extra safety measures, and P&C minutes show Mr Fitzgerald had written to the council the month before the accident, flagging safety and traffic congestion as a matter of “ongoing community concern”.