Skip to content
2SSR Community
Posted on March 2, 2017 by daydream-admin

The Leader interviewed Ron Hoffmans yesterday, who turns 96 this month.

Ron Hoffmans would deny he is the voice of his generation. But as the shire’s – and possibly Australia’s – oldest radio presenter, Mr Hoffmans, who turns 96 on March 4, would certainly qualify as one of its enduring voices.

Every Thursday he travels by bus to and from his home in Cronulla to the 2SSR studio on the Gymea TAFE campus to present his show.

The first hour of his show is Midday Classics and the second hour he devotes to recordings of the Sutherland Shire Symphony Orchestra.

He has just completed the 700th broadcast of his show.

“It’s a hobby. It gets you in touch with people,” MR Hoffmans said.

To read the article in full and watch the interview video – CLICK HERE. 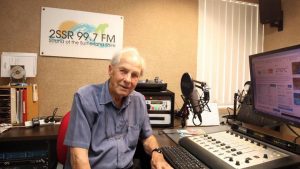