This Sunday (Sunday 14 August) Sideline Eyes will be discussing the sport of Darts ahead of the Sydney Darts Masters that starts this Thursday at the Lyric Theatre at The Star. Micky Brock will preview all the action and Darts Downunder that sees Sydney dress up in all whacky getups with the best stars of the PDC and DPA.

Brendan Tynan-Davey from Southern Districts Rugby Club will also look at 7’s Rugby and look ahead to the upcoming Bledisloe Cup matches.

Former Boxing Champion Nathan “CAV” Wright will chat about boxing, his olympic moments and the local derby between the St George-Illawarra Dragons and the Cronulla Sharks
Bob Birkhead will bring us all the news in Basketball and Peter Vasey another installment in Motorsport. Lauren Hodgson will be focusing in on Women in Sport. Lisa McCrohon will be reviewing the NSW Premier League Semis for the Stingrays as well as the upcoming Grand Final for the Opens Team. 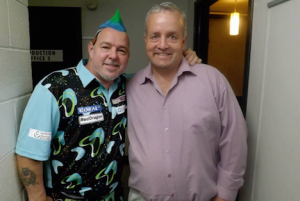 Finally Elza Bevilacqua will bring us more flavors from Brazil in her Healthy Living Segment.