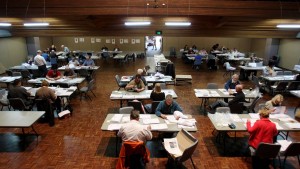 FORMER Sutherland Shire mayor Carol Provan is running neck-and-neck in A Ward with Liberal Scott Williams, who is No. 2 on councillor Kevin Schreiber’s ticket.

If Mr Williams does not get in, Cr Provan will be returned to the council as Cr Kevin Schreiber has given her his preferences.

Cr Provan said she was hopeful.

Her former deputy mayor, George Capsis, did not win a spot but has preferenced Cr Provan.

Mr Capsis thanked the community for allowing him to serve on the council for the past four years.

Labor’s Stefanie Jones in A Ward and Peter Scaysbrook in C Ward are battling Shire Watch.

He predicted that A Ward would be Liberal Kevin Schreiber, Labor’s Stefanie Jones and either independent Carol Provan or the Liberals’ Scott Williams, while in B Ward it would be Cr Johns, the Liberals’ Tracy Cook and Phil Blight.

C Ward would be the Liberals’ Hassan Awada, the ALP’s Peter Scaysbrook and either the Liberals’ Tom Croucher or Putting the Shire First independent Craig McCallum.