The not so Silent Assassins are coming to the 2SSR99.7FM studios in the form of the team from Hitman Boxing at Bankstown.

Trainer Danny Sarkis will be joined by Dimitri ‘the Dominator’ Pats and Fijian sensation Jesse Ravudi. Sideline Eyes will have them dancing around the 2SSR studios ahead of their upcoming fights in November.

Both Jesse and Dimitri will be fighting on theNeutral Corner Fight Promotions. card on November 14 at Club Punchbowl.

To find out all about the night and about what makes these guys tick, tune into 2SSR99.7FM this Sunday from 7pm with Grosey and Stu for the best little sports show this side of the Woronora River.Also on the show we’ll be looking at the Bathurst 1000, Cricket with Tom Iceton, Surfing with Gary T, Hyundai A-League report with Joe Russo, Peter Upham’s NFL report and the regular sports update] 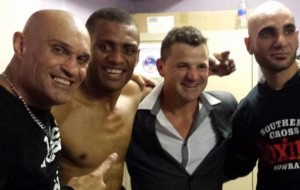