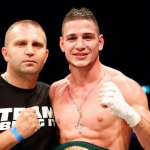 Join Stuart Redman on Sunday from 7pm when he chats with former Australian lightweight champion boxer Valentine Bringit Borg who is lining up for a tilt at the vacant WBO Asia Pacific Youth lightweight title against Tom Ford at the Bankstown Emporium on March 6.

Should he come out unscathed he will be backing up on Paul Nasari’s Neutral Corner Fight Promotions. card on March 27 at Club Punchbowl against Andrew Wallace. Val is an exciting prospect on the lightweight scene in Australia and he has a very interesting story to tell.

Also on Sideline Eyes, Tom Iceton from the Sutherland District Cricket Club will be reviewing the week in cricket including the fate of the sharks, how the blues fared and the ICC World Cup 2015. Joe Russo will be giving us his Hyundai A-League round up along with British Football Watch’s Micky Brock catching up on the EPL. Brendan Tynan-Davey from the Southern Districts Rugby Club Official Page will be wrapping up round 2 of the Super XV Rugby season.

Also looking forward to the best from the west from the boys from All Sport Talk with their weekly sports update.

This week they are previewing the two more AFL Clubs in the Collingwood Football Club and the Gold Coast Suns.