Skip to content
Archive
Posted on December 1, 2012 by twossr 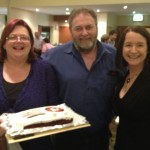 For those of you who attended the Trivia Night, I hope you all enjoyed yourselves. For those who didn’t for one reason or another, you missed a great night, but perhaps you can make it next time.

The end result was a net profit of $3,687 which will be put towards our never ending list of things to do. We had some 120 attendees, which was down on last year, but the profits were very similar, thanks to our auction. The dollars were swollen by so called friends of Anne Warren & Stuart Jones trying to outbid them. Some friends, however this was a fundraising night & all entered into the spirit of it.

The winners on the night were Wes Taylor’s table, so obviously Wes not only has the head for radio, but is also clever. This was a close call with 3 teams tying for 1st . However Wes came up with the winning answer so congratulations. Joyce Mackenzie’s table which has won the previous 3 times was only 1 point behind. The Probus challenge this year was won in a tie breaker by Helensburgh Probus much to John Duckett’s delight, from Cronulla South & 1 point behind, Engadine Probus.

Thanks to all those who donated prizes & chips & the helpers on the night, as  without their assistance it wouldn’t have run so smoothly.