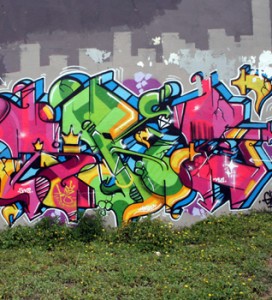 Two youths and one adult will face court after being arrested following an investigation into graffiti-based vandalism in Sutherland Shire.

Officers attached to the Police Transport Command interrupted a number of men spray painting graffiti on a train at Cronulla railway station about 6.40pm on September 26.

The men ran away and police gave chase but could not find them. However, officers found a video camera, still recording, at the scene.

After investigations, officers  used a search warrant at Cronulla and Lilli Pilli properties about 7.40am Thursday afternoon.

Two teenage males — one, 15, of Cronulla and the other, 16, of Lilli Pilli — were arrested and charged with breaking, entering and stealing transport, malicious damage and graffiti-related offences.

An 18 year old Bundeena man, was charged with breaking, entering and stealing, and trespass offences.