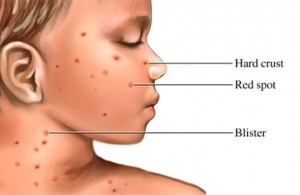 Parents in St George and Sutherland Shire are being urged to keep a lookout for chicken pox symptoms.

At least one Sutherland Shire school advised parents earlier this month that a number of  cases had been diagnosed among year 1 students.

Chicken pox is a highly contagious infectious disease caused by a virus characterised by blister-like lesions.

Symptoms include a sudden-onset fever, runny nose and general feeling of being unwell before the rash appears.

The rash usually begins as small lumps that develop over three or four days before turning into blisters and then scabs.

Symptoms can take two weeks to develop and the virus is spread by coughing or direct contact with the fluid in the blisters.

Those who have not been immunised or have never had chicken pox are most at risk of infection.

Carriers are most infectious in the two days before the rash appears and up to five days later.

Pregnant women, infants or anyone with a weakened immune system should avoid contact with anyone with the disease.