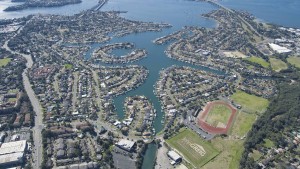 SUTHERLAND Shire Council will review its policy on identifying homes at risk of flooding following changes announced by the state government.

The review will include notations placed on Section 149 certificates, which can greatly reduce property values.

Complaints about the criteria used in this process were criticised at residents’ protest meetings in Sylvania Waters and nearby areas.

Special Minister for State Chris Hartcher announced on the weekend  the government would drop ‘‘onerous’’ statewide sea level rise planning benchmarks for 2050 and 2100.

Councils would be given the freedom to consider local conditions when determining future hazards.

Mr Hartcher said this would deliver clarity to councils on the preparation of Section 149 notices.

A spokeswoman for Sutherland Shire Council said floodplain risk management studies and plans were being prepared for a number of catchments including Gwawley Bay, which covers  Sylvania Waters, Kurnell township, lower Georges River and Woolooware. Apart from the minister’s press release, no details of the changes were known.