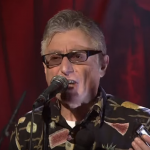 Robert has established a stellar career as one of Australia’s finest RnB/Soul/Blues singers and a master of the harmonica. The Dynamic Hepnotics established local and international fame through their funky soul music culminating in the release of their greatest commercial success  “Soul Kind of Feeling” which remains a staple of commercial radio to this day. While the Band may have “officially broken up in the mid 80’s” their influence and magic live on. The band has just released a wonderful retrospective album/cd of their recording career including previously unheard live recordings.

Robert has undertaken many other RnB/Blues projects since the demise of the Dynamic Hepnotics , however he still remains an potent force in the Sydney RnB/Soul scene in Sydney.

Robert will be talking to David, live on air around 8.30 pm on Tuesday.