Skip to content
Archive
Posted on April 17, 2013 by twossr 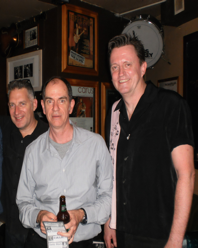 American president John F Kennedy had a drastic situation over his stand-off with the Soviet Union in the ’60s with the Cuban Missile Crisis, but his namesake, Australian musician John Francis Kennedy, has no crisis over his new musical concept, ‘Sons of Sun’.

John has the perfect background to present such a show, growing up in Liverpool in England just as The Beatles were exploding, all the while listening to his parent’s country music. “There was a fascination with country music… [maybe] if you live in a sort of grey, miserable, industrial town in the north of England, this image of wide open spaces and cowboys is very appealing,” he says. “My parents were into country and western music, I used to hear that as a kid.”

As The Beatles were taking off, John was embarking on a voyage of his own – arriving in Australia in the mid-sixties with his parents, who were seeking to take advantage of the economic opportunities on offer in the Lucky Country.

John spent his formative years growing up in Brisbane and formed his first group, ‘JFK and the Cuban Crisis’, with friend James Patterson in 1980, quickly establishing themselves on the local scene. During this time, he released two albums and supported major acts, including Ian Drury and the Blockheads, and The Pretenders. The band relocated to Sydney in 1982 and added a new Rhythm section, becoming the resident band at the Southern Cross Hotel in Surry Hills.

John recounts the rather depressing tale of leaving Sydney at the end of the 1980s, facing the break-up of his then-current band, ‘Love Gone Wrong’. “We’d broke[n] up and I had the choice of either starting a new band again, [with] a new lineup, recruiting new members and basically developing a new band, to get it to a point where I had been,” he says. Faced with this unappealing prospect, he instead packed his bags and guitar, heading to the US, spending six months in L.A., New York and Texas. During this period, he scored gigs wherever he could, including solo acoustic sets and small gigs in bars and clubs. At the end of this period he travelled to London, but found it difficult to break into the scene there. It wasn’t a totally lost cause, however – contacted by a contemporary in Berlin, he found himself invited to sit on a panel about independent music, and to record an E.P.

Staying in Berlin for four years and becoming instrumental in the small but thriving music scene there, John formed another band, John Kennedy and the Honeymooners, and released another E.P. with that band. Having met his wife in Berlin during this time, the freshly-minted couple wanted to see the world. They packed up and travelled to Singapore and eventually to Lamma Island off Hong Kong – widely-known as a mecca for Western backpackers because of its cheap rents and alternative lifestyle. Renting a performance space at the Fringe Club, John cut his teeth on small theatre-type shows where he developed the art of relating to a small, intimate audience. “That was pretty much the first experience I had doing little theatre-type shows… doing them still primarily as a solo artist… lent itself a lot more to talking. In a sit-down situation it just gives you the opportunity to talk more, [and] makes it easier to relate to people.”

Leaving Hong Kong after an extended stay, John and his wife settled in Holland, where he again quickly established himself as a must-see live act in clubs and bars all over that country, which was itself supporting a very healthy live music scene at the time.

John’s life experiences and influences all led him to return to Australia, where he eventually released two CDs – ‘Sons of Sun’, volumes one and two. These consisted of cover versions of songs by artists that started their careers at Sun Records in Memphis – and that’s where the idea first started to form for the stage variant. John had always been fascinated by these musicians and, in particular, Sam Phillips. “Before he found these white hillbilly cats like Elvis and Carl Perkins, his mission was to have black rhythm and blues heard by a wider audience,” Kennedy says. “There was all sorts of cross-pollination going on.”

He had always found the music intriguing, and this led to him having the idea of how to present these songs live, without the conventional performance tropes of a cover band. The idea was developed in conversations with a colleague from Melbourne, playwright Kieran Carroll, with whom John had previously developed music for another show. Kieran then developed the show with three actors playing multiple roles, with John and a three-piece backing band on a very small stage, almost taking on the role of the famous performers from days gone by joining  with the actors on stage and playing the classic hits from these long ago recording superstars

All the while focusing on Sam Phillips as the main element of the story. With 35 songs and specifically crafted for small, intimate dinner/theatre restaurant venues the stage play is proving to be very successful. John is certain that the reason for this is simply the appeal of the music. You can be sure whatever the reason for the success of the show one of them is the experience and passion that John has for live independent music that will see him never in Crisis.