Skip to content
2SSR Community
Posted on March 14, 2014 by twossr 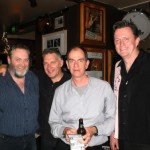 Coming soon to the Shire  is well-known Australian musician John Francis Kennedy, who has developed an intimate stage/dinner/music show about Sam Phillips.

John has the perfect background to present such a show, growing up in Liverpool in England. Just As The Beatles were taking off, John was embarking on a voyage of his own – arriving in Australia in the mid-sixties with his parents, who were seeking to take advantage of the economic opportunities on offer in the Lucky Country.

John spent his formative years in Brisbane and formed his first group, ‘JFK and the Cuban Crisis’, quickly establishing themselves on the local scene. The band relocated to Sydney in ’82  becoming the resident band at the Southern Cross Hotel in Surry Hills.

John recounts the rather depressing tale of leaving Sydney at the end of the 1980’s, facing the break-up of his then-current band, ‘Love Gone Wrong’. “We’d broke[n] up and I had the choice of either starting a new band again, [with] a new lineup, recruiting new members and basically developing a new band, to get it to a point where I had been,” he says. Faced with this unappealing prospect, he instead packed his bags and guitar, heading to the US, spending six months in L.A., New York and Texas. During this period, he scored gigs wherever he could, including solo acoustic sets and small gigs in bars and clubs. At the end of this period he travelled to London, but found it difficult to break into the scene there. It wasn’t a totally lost cause, however – contacted by a contemporary in Berlin, he found himself invited to sit on a panel about independent music, and to record an E.P.

Staying in Berlin for four years and becoming instrumental in the small but thriving music scene there, John formed another band and released another E.P. Having met his wife in Berlin during this time, the freshly-minted couple wanted to see the world.

John’s life experiences and influences all led him to return to Australia, where he eventually released two CDs – ‘Sons of Sun’, volumes one and two. These consisted of cover versions of songs by artists that started their careers at Sun Records in Memphis – and that’s where the idea first started to form for the stage variant.

He had always found the music intriguing, and this led to him having the idea of how to present these songs live, without the conventional performance tropes of a cover band. The idea was developed in conversations with a colleague from Melbourne, playwright Kieran Carroll, with whom John had previously developed music for another show.

Kieran then developed the show with three actors playing multiple roles, with John and a three-piece backing band on a very small stage, almost taking on the role of the famous performers from days gone by joining  with the actors on stage and playing the classic hits.All the while focusing on Sam Phillips as the main element of the story.

With 35 songs and specifically crafted for small, intimate dinner/theatre restaurant venues the stage play is proving to be very successful.

The Show is coming to the Brass Monkey in Cronulla and 2SSR 99.7 will be featuring interviews with John Kennedy. Keep listening for details.