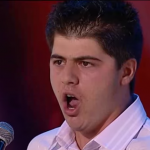 Vincent won Australia’s Got Talent on 22 April 2009. His main inspiration is his late grandfather, Bruno, who raised him and taught him how to sing. Vincent has said that he would like to follow in the footsteps of his idol Anthony Warlow.
Vincent attended school at De La Salle College Caringbah[2] and De La Salle College (Cronulla, NSW).[3]He hopes to study at the Conservatorio di Musica Giuseppe Verdi (the Milan Conservatory), the leading musical institution in Italy where Giacomo Puccini also studied.

Two of Vincent’s albums, Compass and The Great Tenor Songbook, have been certified Gold in Australia.