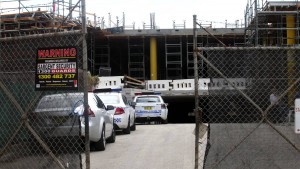 A man, 55, has died after falling off a construction site for a Woolworths supermarket at Mortdale thursday.

Paramedics were called to the site in Roberts Avenue after reports that a builder had fallen four to five metres from the site about 8.20am.

The man died at the scene.

The builder was working on a construction site being built for a supermarket, a gym and office space, next door to St George Maso’s.

A man working next door said he saw a group of men working on the top of the building before he heard sirens.

A Woolworths spokeswoman said the company was an incoming tenant to the development.

The supermarket is expected to open in mid-2013.

Romanous Construction, based at Hurstville, is responsible for the construction site.

A report will be prepared for the coroner.