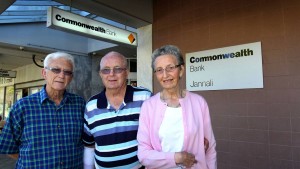 CUSTOMERS, shopkeepers and community workers have been shocked by the Commonwealth Bank’s decision to close its Jannali branch.

The move, which is due to take place on October 26, means there will no longer be a bank in a wide area, which also includes Bonnet Bay, Kareela, Como and Oyster Bay.

Jannali once had five banks, but residents who want personal service will in future have to travel to Sutherland, Gymea or Sylvania.

In a letter addressed to “our valued clients”, the bank said the decision had been taken “after very careful consideration of a number of factors which include the proximity of other branches and site specific issues.”

The bank said its lease ended on November 6, “and we are unable to secure a lease on acceptable terms given the proposed Woolworths’ development next door to, and encompassing, our premises.”

It said it was trying to secure a site for an ATM and, for three months, would run a free round-trip bus to Sutherland every two weeks on the day pensions were paid.