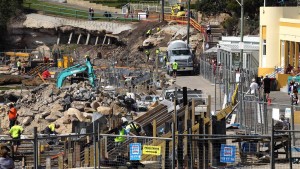 THE new seawall at Cronulla beach is due to be completed next month, but repaving The Esplanade and other improvements will be postponed until next winter.

Sutherland Shire Council decided to suspend work on the $3.3 million project over summer because it could not be finished by the October deadline it set.

Warm weather is already drawing big numbers to the beach at weekends and the Cronulla Crays Nippers season starts on October 7.

A council spokeswoman said the first section of temporary fencing, in front of Zimzala restaurant, was scheduled to be removed by tomorrow.

“The seawall, paving and landscaping from the stairs, south of Zimzala, to Cronulla Point will be completed by the end of October and the beach will progressively be restored from late September,” she said.

“Streetscaping of The Esplanade will be postponed until next winter because it can’t be completed by deadline.”

The spokeswoman said streetscaping, which included paving, lighting and furniture installation north of the stairs up to The Esplanade, was scheduled to start next April and be completed by June.

“Under its contract, the council can require the contractor to vacate the site and return after the summer,” she said.

The spokeswoman said the project was delayed by damage to formwork during two separate significant storms.