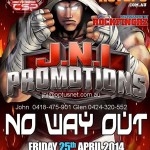 Sideline Eyes have several special guests talking to BJ and Grosey from 7pm this Sunday including Former Wallaby and current Forwards coach of the Junior Wallabies Cameron Blades. Cameron will be discussing not only his playing past but also on his coaching days which included his stint at Southern Districts Rugby Club and is now steering the Junior Wallabies toward a world cup in June in NZ.

We also have Daniel Barber who will be heading the card for the Muay Thai fight night at the Hurstville Entertainment Centre on Anzac Day from 8pm. Joining him in the 2SSR 99.7FM studios will be fight promoter John Ioannus who will be letting our listeners know what they can expect on the night of entertainment which there is NO WAY OUT.