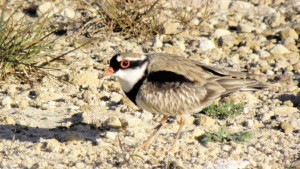 LIKE many young parents these days, they decided to brave plane noise and traffic to raise their brood close to the city.

Attracted by the new Turrella wetland, a pair of black-fronted dotterel have moved to Wolli Creek — the first time the species has been observed nesting in the area.

Wolli Creek Preservation Society bird co-ordinator Dorothy Luther said the arrival of the pair of waders had “caused great excitement” among bird watchers and nature lovers in the area.

Mr Gatenby said the breeding pair were a testament to the success of re-creating saltmarsh along the banks of Wolli Creek.

But with their eggs due to hatch any day now the birds, which nest on the ground, still have a number of challenges before their chicks successfully fledge.

Dogs, foxes and cats are the main threats, but Ms Luther said with the help of nearby residents, who regularly checked on the birds, she was optimistic they would thrive.