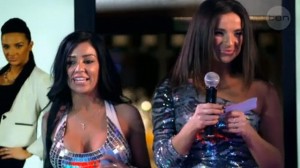 Channel Ten’s series The Shire wound to a close this week, with an average of 237,000 viewers nationally (2000 more than Bananas in Pyjamas) for its Monday night finale. But the show’s stars are still with us, here and there.

Vernesa and Sophie were the guests of honour at the launch of a new product yesterday that seems almost tailor-made to reflect the level of pain their on-screen appearances caused – nose hair removal strips for men. Presumably in some capacity as beauty experts, the pair presided over the launch of the (drum roll, please) Nads Nose Wax kit to tear the hairs out of a man’s nostrils. It took place at Wildfire at the Overseas Passengers Terminal.

As for Beckaa, aka Rebecca Noun, the girl who was last seen (on the series) threatening to quit her uni studies to take up beauty pageants, safe in the knowledge her ever-acquiescent daddy would once again foot the bill? Well despite the fact the series wrapped up with barely a mention of her, there were some large hints about what she’s up to next when she appeared in Sutherland Local Court on Monday to answer charges of driving her mum’s sports car while still on P-plates.

Driving charge … now we know why Beckaa was chauffeur driven.

Noun, 20, pleaded guilty, we are told, but her lawyer asked that she not lose her licence because she needed it to commute to University of Wollongong and that if a fine was levied could it be pro bono work because she could not afford the fine.

So from that it’s fairly safe to conclude daddy finally put his foot down and said no to the pageants and no to propping up her spending.