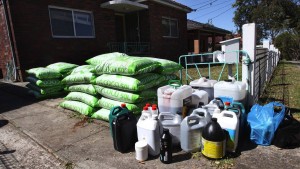 OFFICERS have seized more than $1.6 million worth of cannabis plants from three St George drug houses in the past week.

Three men are before the courts after police seized more than 330 plants in separate raids at Beverley Park, Penshurst and Bexley North.

The first arrest came after 109 cannabis plants were found at a Beverley Park house when emergency services were called to a fire on Friday, September 7.

Police allegedly seized 109 cannabis plants from the Lobb Crescent house after firefighters put out a blaze in the kitchen.

It is believed the fire was caused by an illegal modification used to steal electricity from power mains. A 35 year old Bankstown man was arrested.

A week later officers attached to the Redfern region enforcement squad seized 136 cannabis plants worth $680,000 and four kilograms of dried leaf from a house in Shaw Street, Bexley North.

A 28 year old Campsie man was taken to St George police station and charged with four offences, including enhanced indoor cultivation of cannabis for commercial purposes and stealing electricity.

Police from the same squad also used a search warrant to seize 82 plants worth $410,000 from a house in Kuroki Street, Penshurst, the same day. It is alleged officers found a man,  watering cannabis plants and hydroponic cultivation equipment in three rooms.

The man, who was renting the house, was charged with three offences, including enhanced indoor cultivation of cannabis for a commercial purpose. He was refused bail and was expected to appear in court last Saturday.

The combined street value of the plants is $1.6 million.

Police said they could not say whether there were any links between the three drug houses.